On the Autobiography of Another

I would add that she chose the men she wrote about as intellectual foils. Her sense of extreme isolation rivals theirs. She could not come into contact with, recognize herself, except through these encounters with Leiris, Lukacz, Benjamin, Canetti, Cioran, Camus, Sartre, Barthes etc.

“Why do we read a writer’s journal…Here we read the writer in the first person; we encounter the ego behind the masks of ego in an author’s works… for the modern consciousness, the artist (replacing the saint) is the exemplary sufferer. As a man he suffers, as a writer, he transforms his sufferings into art.”

Again, on Michel Leiris, “…to be a writer, a man of letters, is not enough. It is boring, pallid. It lacks danger. Michel Leiris must feel, as he writes, the equivalent of the bullfighter’s knowledge that he risks being gored. Only then is writing worthwhile. But how? …Leiris loathes his physical cowardice and ineptness. Yet far from wishing to exonerate himself for his ugly failings, what he seems to wish is to convince himself that this unsatisfactory body – and this unseemly character – really exists. Haunted by a sense of the unreality of the world, and ultimately of himself, Leiris searches for a strong, unequivocal feeling… What is real is defined as that which involves the risk of death.”

I am seventeen years old, sneaking into the house long past midnight, against the rules. Jeff, the black dachshund my mother adopted the year before will bark when I arrive and my mother will awaken, thus I am expected to be home before midnight or not at all. My mother refuses to be roused in the middle of the night as she finds falling back to sleep terribly difficult. Her mind is too active; memories torture her nights. Sleep, once arrived at, is too precious to be sacrificed to her angst-ridden adolescent daughter’s new social life. On this particular evening I choose to come home, brave her potential wrath and slide the heavy front door open on its squeaky hinges. Each foot is laid carefully on the ground, rolled from the side to avoid the loud slap a shoe can make on the hardwood floor. I wrap my fingers around the inside handle and move with the door, silent as a mime, to its swish-click closure, and turn to see my crouching mother on the carpeted stairs, in baggy satin underwear with a mug in her hand and a book open on her lap. She can’t sleep. Not my fault. She’s been awake for hours, sick and sniffling, drinking rum from the rarely touched liquor cabinet, and reading The Volcano Lover, by Susan Sontag. Anticipating rage, I instead got a conspiratorial drunken rhapsodic on Sontag’s prose. I think this is the first time I heard of her, so for me, her image is forever wedded to that of my drunken mother in the stairwell. Thirteen years later, my mother lay in her bed in Italy, talking to me in thick drowsy tones about her lifelong feeling of loneliness – deep-seated isolation even in the midst of a full social life – and I think of Sontag.
PREV / NEXT   2 / 7
BACK TO NO LEGS 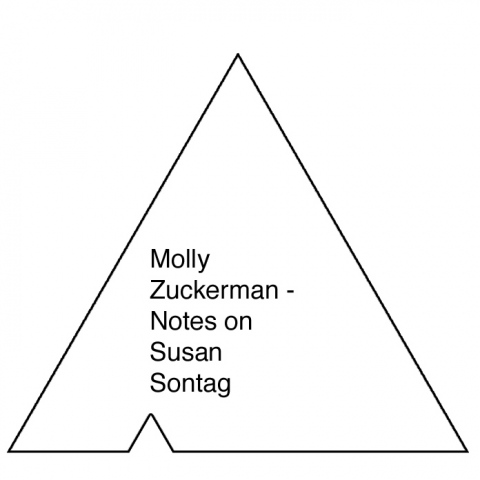